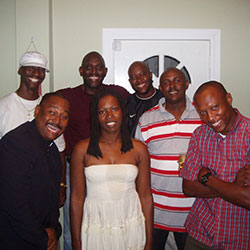 In September 1988 when Selvyn C. Lewis, Bevon Edwards, Dexter Jeffrey, Jason Sylvester and Davon Felix ascended to the fourth form level of the Point Fortin Senior Secondary School, close friendships amongst them were forged. They formed an organisation called Daddy Pompey and the CIA Crew. The essential goal behind "Daddy Pompey and the CIA Crew" was to put forward positive messages through music.

By December 27th, 1989, the organisation had broadened its vision. It evolved into an entity, founded by Selvyn C. Lewis and renamed The barcam.?The barcam?, is a word especially coined to mean; "The struggle to uplift and unify mankind".

It was necessary to coin a word, since no word existed previously which embraced the fullness of meaning that the group desired.

Vaughnette Bigford and Ernesto Kesar, because of close relationships with foundation members, soon joined The barcam. Anslem Lessey, Anthony Felix, Henry and Chris Thomas were also some of the key personalities who inspired the organisation's development.

Over the fifteen years of The barcam's existence, the organisation has developed useful links by forging partnerships in developmental initiatives with national, regional and international bodies. The barcam has devised a plan that allows the wider community to participate more effectively in youth development initiatives.

Consequently, The barcam can now be defined as a community based developmental organisation, which is primarily involved in the execution of activities and programmes aimed at the development of youth and communities through participation, education, the promotion of culture and a variety of humanitarian endeavours.